Monthly Message from the Director of Missions
December, 2022 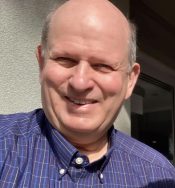 First of all I would like to give praise to the Lord that we have now received an answer to many prayers for my wife, Rachel. Back in the fall she received the news that cancer had once again returned. I
announced this to the association at the annual meeting and prayer was held for her.

Many churches and individuals added her to their prayer lists. We received many cards, texts, gifts and meals delivered as we went through a surgery on October 27th. She had previously had surgery
and treatment for cancer in Des Moines, Iowa in 2011 before we moved here. So we chose to return to Des Moines so she could use the same surgeon and oncologist. It appears that the surgery was successful in removing the tumor and no chemotherapy or radiation will be needed. She is recovering and getting stronger each day now.

Thank you for your support during this time.

At the annual meeting in September, the association adopted a new strategy plan for the future. It calls for regional coordinators and a new structure to be implemented. The details of this plan are still being worked out and implemented in the coming year or two.

One of the refreshing changes that will be immediately seen will be in the quarterly meetings of the association. The meetings will now be referred to as “Ministry Celebrations.” The January 26th ministry celebration will feature just a little bit of business and then quickly turn to three interviews with pastors of THBA churches. The hope is to have a pastor or representative of a strong church, a
struggling church and a church that is not very well engaged with the association. I will invite these church representatives to the meeting and interview them, let them tell their story. Then we will pray for them. And perhaps some good networking and ministry assistance can come about from this kind of exposure. This will take place in the April, July and January executive board meeting times. And a similar structure—modified somewhat—will happen in the September annual meeting. So stay tuned for these changes. The January 26th ministry celebration will be held at FBC, Kirksville.

During the annual meeting in September the budget for 2023 was reduced by $9,400. Most ministries were funded at 50% of their 2022 amount. So we will have to tighten our belt and streamline some things this year.

Our newsletter will go e-mail delivery only. There are several other things that we normally do which we will have to cut back on or ask for churches and individuals to sponsor the events. I have already received a $1,000 check from a church to be used as needed next year. We will get by and raise funds to do what needs to be done as best we can.

But we are going to continue to network with all of you and help out with linking churches and ministries together. “Assisting one another to bring Christ to our communities” is our new mission statement. Let’s work together to help make that a reality